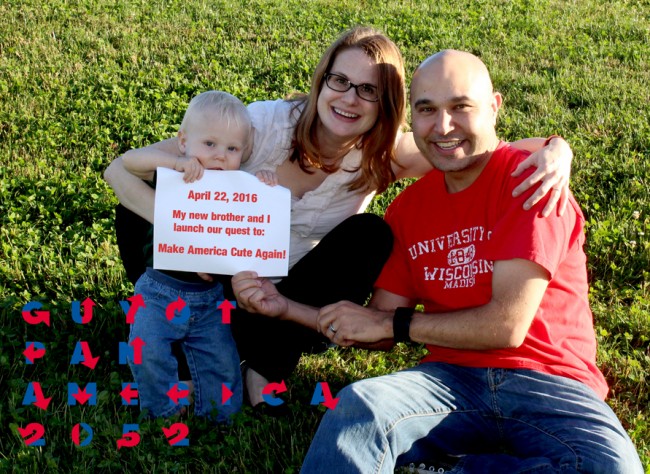 Americans love a political dynasty as much as they love Freedom Fries. Adams and Adams, the Roosevelts, an obscene amount of Kennedys, the unfortunately named Bushes and the not-quite Clintons.

A Willy Street dwelling couple wants a part of that rhetorical action and is willing to go to normal biological lengths to achieve it. Late last year they birthed what they hoped would evolve into the purest expression of a natural child with the least amount of phosphorus run-off into area lakes.

After viewing recently the touching and triumphal political story of true Americans Mays and Mitch Gilliam; the new parents felt that nearly one year-old Salah could also achieve greatness or at least avoid mediocrity. To protect against the latter they are projecting their political ambitions onto their offspring by announcing the Guyot Pan America campaign to vault a Guyot into the highest office in the land by 2052.

The key to a White House win is a balanced ticket and Guyot Pan America is therefore proud to announce Salah’s running mate and younger brother…who will be named on or about April 22, 2016.

“The date is not certain yet as some of the details are still being worked out,” said Guyot Pan America Communications Director Fareed Guyot. “But we feel a family member, especially a sibling close in age, will bring intrinsic strengths such as saving on printing costs and clothes. We call it trickle-down haberdashery and it can work for America too!”

Winning the presidency requires not just a sharp crib speech, but also avoiding “Pack-to-Play” temptations, denouncing special interests named for a fruit or taking direction by glitterati that could be mistaken for a direction.

“We are finalizing our messaging as we anticipate the technologies of 2052 will actually allow our candidate to consciously couple with a voter’s super-ego allowing Salah and the Veep-to-be to flip-flop as necessary,” Fareed said.

By announcing the campaign now Guyot Pan America will have the time required to raise the “all the money there is” dollars to fund the apparatus needed to communicate the brother’s message of “Poop and Change” to America.

GPA’s Chief Nutritionist Jamie Guyot feels there is a no less crucial time than now to get started as years may be needed to overcome the lingering juice box plague of the 2000s.

“I just hope they will be getting enough to eat,” Jamie said.